Are You Ready? New Steve Walsh Album in November!

We just spoke with the very talented and forward thinking Khalil from Escape Music and we couldn't be more excited to share with you a few more tidbits to get you ready for the release on November 10! Few labels in today's music environment allow for the creativity that is essential to make groundbreaking material. We are very happy Steve has found such a home! There are 14 tracks: 9 tracks with Steve solo, 1 duet with Jerome Mazza and 4 tracks Jerome has provided. That's a 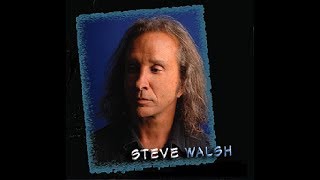 Steve is coming out with a new solo album that will be released on November 10th , and also a special release in Japan on November 21 of this year. The 1st track was released by the label featuring Jerome Mazza, called Born in Fire. They sent it out exclusively to a British Radio station that broadcasts out of Nottingham for its debut (ARFM) https://www.arfm.co.uk/ : The Broadcast happened on August 6 - and that track is already appearing on a few independent label charts